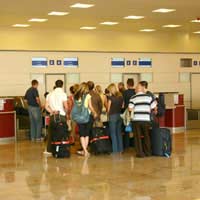 Out on your own, meeting new people, going new places - gap years can be an incredible dose of freedom for most young people. Often with this freedom comes the idea that dabbling in drugs is all just part of the exploration. Unfortunately, many travellers have been jailed for less than dabbling, some even incarcerated for inadvertent possession! In order to enjoy your gap year at the pool bar, not behind bars, make sure you steer clear of drugs while abroad.

Drug laws will vary from country to country on your travels. In order to avoid unwittingly breaking these laws, familiarise yourself with the legal codes of your host countries. These codes may also regulate cigarettes and alcohol, criminalising them in ways with which you are unfamiliar. For example:

Travelling with cigarettes, tobacco products, alcohol and of course drugs is also regulated differently by different countries. A general rule of thumb is to never cross national borders with drugs in your possession, and to check with customs authorities on the amount of tobacco and alcohol you may transport. Many times young travellers are targeted to unknowingly smuggle drugs, so before you travel make sure to:At ports, depots and airports around the world, everything from customs agents to policemen with sniffer dogs to the military may be used to inspect luggage. If anything is found amiss, repercussions can range from routine questioning to a strip search and incarceration. Take every precaution to avoid any misunderstandings.

If your host country's drug laws aren't enough to scare you straight and you still have a yearning to explore drug cultures abroad, think twice. Remember:Taking drugs is never a healthy activity, no matter which country you are visiting or living within. Avoid any unpleasant surprises during your gap year by steering clear of drugs while abroad.

Replacing a Lost or Stolen Passport

Staying Safe in the Sun